To ensure the quality of our products, Oglaend System perform tests at our laboratory in Kleppe, Norway. In addition, many of our products are certified by independent third-party bureaus such as DNV and the American Bureau of Shipping (ABS).

We are proud to have a number of agencies certifying the performance and quality of our products including: Det Norske Veritas (DNV), Russian Maritime Register of Shipping (RMRS), American Bureau of Shipping (ABS) and Underwriters Laboratories (UL).

In the box to the right you can find the links to the databases for the respective organisations, which publish our product certificates.

Many Oglaend System products are subjected to rigorous load testing; in order to supply appropriate safety guidelines for use. Cable ladders and cable trays are often tested to determine safe working load (SWL). The SWL of a component is intended as the maximum load it should be able to support under ordinary use. This testing is usually done according to a recognised standard issued by a standards organisation such as the international IEC or the American NEMA. The specific way in which the load test is carried out, as well as how the safe working load is calculated, varies.

The most significant difference between IEC and NEMA load tests is system configuration. While the NEMA load test is carried out on a single span consisting of a single cable ladder or tray; IEC load tests are performed on a two-span plus cantilever configuration consisting of several cable ladders or cable trays. The multi-span configuration of the IEC test procedure considers the stiffening effect of counterweights from neighbouring spans. This gives a realistic result representing normal installation practice. Loading results based on the NEMA standard is relevant when comparing maximum load between different cable ladders and cable trays. The IEC test also requires a splice in the middle of the longest span, thereby measuring a more realistic worst-case scenario than the NEMA test. The IEC standard adheres to the installation recommendations of the cable ladder producer, however; the NEMA standard is accompanied by installation guidelines.

The IEC and NEMA standards also differ in their interpretation of load test data. A NEMA test’s SWL is always determined by dividing the breaking load by a safety factor of 1.5. The IEC uses a corresponding safety factor of minimum 1.7, and restrict deflection of SWL to 1/100 of the span length. Despite their differences, both methods adequately test the load carrying capacity of components. Due to the added safety factors of 1.5 and 1.7, both IEC and NEMA SWL estimates are highly conservative.

In case of a fire, cable ladders may be exposed to direct or indirect flames, however; one of the biggest concerns is not a direct flame, but the heat a fire produces. Testing from Darchem Engineering (not on Oglaend System products) and SINTEF (O ladders, the forerunner of today’s OE ladders) support the same conclusions. Lightweight cable ladders in aluminium and composite are unable to withstand a serious fire or other forms of extreme heat development. Stainless Steel (SS) and Carbon Steel/HDG ladders, on the other hand, seem to withstand temperatures over 1000 degrees Celsius over extended periods of time. It should be noted that although the HDG cable ladders seem able to withstand these temperatures, their deflection increase is much greater than that of their SS counterparts. Additionally, the protective zinc layer of the HDG ladders tend to melt away and sometimes fall in large drops. This happens when the temperature passes zinc’s melting point of 419 degrees Celsius. This could cause damage to personnel and equipment. 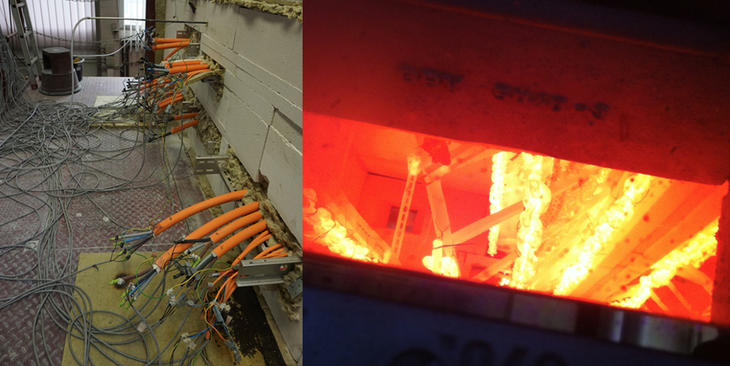 Other environmental issues to consider are environmental loads such as wind load and electromagnetic compatibility. More information is available upon request for our customers.